Kazakh businessman and political dissident. One of the key figures of Kazakh opposition deprecating the regime of President Nazarbayev.

The state terrorism carried out by Nazarbaev’s security forces has spilled beyond Kazakhstan’s borders and must be stopped.

The kidnapping of my family is a demonstration of the vile and despicable nature of Nazarbayev’s regime. 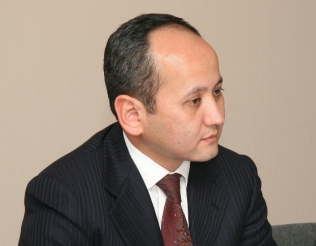 Mukhtar Ablyazov (born on 16 May, 1963) was born and grew up in the village of Galkino in the southern region of Kazakhstan. In 1980, he entered the Almaty State University. In his third year, he transferred to the University ‘Moscow Engineering Physics Institute’ to continue his studies at the Department of Theoretical Nuclear Physics, where he earned the title of ‘specialist’. In 1990, he commenced post-graduate studies at the Moscow Engineering Physics Institute. Within a year, hehad decided to leave the field of science and start his own business.

In 1993, he established a holding company ‘Astana Holdings’, dealing, amongst other things, with the production of salt (Artemsol) and pasta as well as running business in banking sector (Astana-Holding-Bank) and automotive industry (Astana Motors). Ablyazov was the President of ‘Astana Holdings’ until 1997.

In July 1997, Abalyazov was appointed by President Nazarbayev, chairman of the Supervisory Board of the public company ‘Kazakhstan Electricity Grid Operating Company’ (KEGOC), a monopolist in the sphere of electricity supply. KEGOC, having previously plunged into a deep crisis, became profitable under the chairmanship of Ablyazov, which became a trigger for subsequent fundamental reforms in the electricity sector.
In the years 1998 and 1999, Ablyazov, held the post of Minster of Energy, Industry and Trade of the Republic of Kazakhstan and developed a programme of reforms, recommending the implementation of market methods into the economy. He also spoke out against protectionism, used towards the companies controlled by public officers, and as a result of that, he came into conflict with President Nazarbayev.

In 1998, Ablyazov established an investment fund which acquired from the state 100% of the shares of TuranAlem bank (since 2008 - BTA Bank) for the sum of $ 72 million. According to Ablyazov, President Nazarbayev’s son-in-law, Timur Kulibayev, endeavoured to prevent him from acquiring the bank. Additionally, Ablyazov announced that in 2000, another son-in-law of Nazarbayev, Rakhat Aliyev, demanded that part of Bank TuranAlem’s shares be transferred into the hands of Nazarbayev’s family members.
In October 1999, the Kazakh government was dissolved and Ablyazov decided to resume his business activity, justifying his decision by his disapproval of Nazarbayev’s policy. At the same time, in 1999, a criminal case was instituted against Ablyazov on charges of abuse of office, embezzlement of funds and tax avoidance during his tenure as the Minister of Energy. In September 2001, he was arrested, but shortly after, he was released from custody. The reason for Ablyazov’s persecution was his refusal to take office in the new government of the Republic of Kazakhstan. 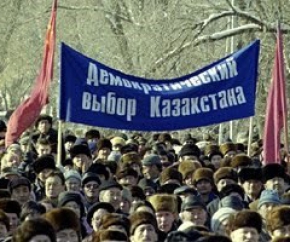 In November 2001, Ablyazov became one of the organisers and leaders of the association ‘Democratic Choice of Kazakhstan’ (DCK). DCK was established by members of political and economic elites with pro-reformative and pro-business bias. Even though, in the beginning of the 2000s, their founders were part of the system of government, afterwards. their paths with President Nazarbayev diverged; they believed that economic liberalisation should entail democratic change.

Having officially distanced himself from Nazarbayev’s policy, Ablyazov and other founders of DCK faced oppression. Ablyazov reported that on 23 January, 2002, he had a discussion with President Nazarbayev, during which Nazarbayev announced the institution of criminal proceedings against DCK members who would not withdraw from the party’s activity. Also, Nazarbayev reportedly announced the takeover of Ablyazov’s assets in the event that he continued to carry out his political activity.

On 27 March, 2002, Ablyazov was arrested by the financial police agency on charges of acting ultra vires during his tenure as chairman of the Supervisory Board of the public company KEGOC (Article 307, section 3 ‘abuse of function’ and Article 310, section 1 ‘Illegal participation in business activity’). As a result, on 18 July, 2002, the Supreme Court of the Republic of Kazakhstan sentenced Ablyazov to six years’ imprisonment, depriving him of the right of appeal. International observers from Human Rights Watch, Amnesty International and the European Parliament noted that the proceedings against Mukhtar Ablyazov had been carried out behind closed doors and were characterised by numerous procedural violations. Whilst in prison, Mukhtar Ablyazov was repeatedly subjected to torture and battery, after his release from custody he had difficulty walking for a prolonged period of time. Simultaneously, he managed to transfer almost all of his shares in TuranAlem Bank to his partner Erzhan Tatishev. He was robbed of his remaining assets during his imprisonment.

In April 2003, Mukhtar Ablyazov filed a request to be pardoned which was signed by Nazarbayev on 13 May, 2003. One of the conditions for his release was an obligation to cease his political activity. After his release from custody, Mukhtar Ablyazov publicly announced that he would cease his activity in DCK and resume his business activity. In response to Abalyazov’s announcement, DCK activists concluded that both the request for pardon and his cessation of political activity resulted from pressure exerted on him by Kazakh authorities. After his release from custody, Ablyazov left Kazakhstan and moved to Moscow where he became involved in the property development industry.

In December 2004, the chairman of the board of directors of the TuranAlem bank, Erzhan Tatishev, died. Just before his death, Tatishev visited Ablyazov in Moscow and

informed him of having been compelled to transfer 9% of the shares to the President’s representatives. Simultaneously, Nazarbayev forced Tatishev to transfer 25% shares of the bank.

On 20 May, 2005, a meeting of the TuranAlem bank’s Board of Directors was held. During the meeting, a decision was made to remove from office, the incumbent chairman of the board, Serik Ualiyeva and elect Mukhtar Ablyazov.

When managing the bank, within less than four years Ablyazov achieved a five-fold increase in assets, thanks to which TuranAlem (since 2008 - BTA) became one of the biggest private banks in the Commonwealth of Independent States.

Due to continuing his political activity, in 2009 Ablyazov once again fell out of favour with President Nazarbayev. Additionally, the success of the bank brought about a situation when Nazarbayev and members of his family began to demand the transfer of 50 % of BTA shares to their names. However, Ablyazov rejected Nazarbayev’s ultimatum.

Hence, under the pretext of fighting the crisis in the financial sector, the President proceeded with the privatisation of the bank. On 2 February, 2009, Samruk-Kazyna, a company owned entirely by Kazakhstan, took control of the bank. Ablyazov was dismissed from his role as President of the Board and left Kazakhstan for fear of persecution.

At the same time, the General Prosecutor’s Office of Kazakhstan initiated proceedings against former chiefs of BTA, including Ablyazov, accusing them of misappropriation of entrusted property (Article 176 of the Criminal Code of the Republic of Kazakhstan)and the establishment of an organised criminal group (Article 235 of the Criminal Code of the Republic of Kazakhstan). According to the General Prosecutor’s Office, in the period between 2005-2008, former bosses of BTA bank siphoned off $ 6 billion from the bank. Criminal proceedings were also initiated in Ukraine and Russia. 12 top managers were sentenced to prison terms ranging from two to eight years, and arrest warrants were issued for the remaining members of management, including Ablyazov.

Shortly after leaving Kazakhstan, in September 2009, the new board of BTA began to file claims against Ablyazov to the UK Supreme Court. The accusations presented by the new management of BTA were identical to those filed against Ablyazov in Kazakhstan.

On 29 January, 2011, London metropolitan police served Mukhtar Ablyazov with a so-called ‘Osman warning’, notifying him of an assassination threat. Simultaneously, the police informed him that they couldn’t ensure him protection against this threat on a daily and hourly basis. In July 2011, the Home Office (british Ministry of the Interior) granted him asylum, citing the political motives behind the criminal charges initiated against him.

During the ongoing proceedings, in August 2009, Judge William Blair issued a decision to freeze Ablyazov’s all assets. In 2001, BTA accused Ablyazov of breaching the court order which demanded he disclose all his assets. In February 2012, Judge Nigel Teare handed down a ruling, sentencing Mukhtar Ablyazov to 22 months’ incarceration, having deemed his failure to disclose all assets as to be in contempt of court. Ablyazov refused to serve the sentence, fearing that his stay in custody would deprive him of the chance to defend his interests.

In late February 2012, BTA Bank filed a motion with the court, requesting that Ablyazov be deprived of his right to defence unless he reported in order to serve the sentence. The judge endorsed the request. Mukhtar Ablyazov appealed to the European Court of Human Rights claiming that British legal system had failed to grant him the right to a fair trial.

Up to the end of July, Ablyazov’s whereabouts were a mystery.

On 31 July, 2013, the French branch of Interpol reported that in the South of France, near the city of Cannes, the police had arrested Ablyazov on the basis of a request by Ukrainian law enforcement bodies to extradite the Kazakh politician. On 1 August, 2013, the first hearing in the case of Mukhtar Ablyazov was held in the town of Aix-en-Provants. At the moment, Mukhtar Ablyazov is being remanded in custody until such time when the court shall consider the request for his extradition. The Court has twice rejected his motion to apply house arrest.

Ablyazov’s first extradition hearing was set for 5th December 2013, but by the court’s decision, it was postponed until 12th December. Also on the second date, in December, the court did not issue a decision on rendering Ablyazov to Ukraine or Russia. After cross-examinations, the hearing was adjourned until 9th January 2014. At the third hearing, which was held as planned, the court granted the requests and authorised Ablyazov’s extradition. The Russian Federation was identified as the preferred place for extradition. The dissident’s defence lawyers filed an appeal against the court’s decision.

In March 2014, the Ukrainian portal trust.ua published journalist investigation into, amongst other things, the Ukrainian request for the extradition of Mukhtar Ablyazov. The journalists disclosed a number of irregularities in the matter, inter alia, close cooperation between an officer of the Chief Investigator of the Ministry of Internal Affairs with the law firm working for BTA Bank; use of fabricated evidence and mysterious text messages sent between the French prosecutor and the lawyers representing Ukraine.

On 9th April 2014, the French Cassation Court repealed its consent to Ablyazov’s extradition and decided that the proceedings should commence anew in a court in Lyon.