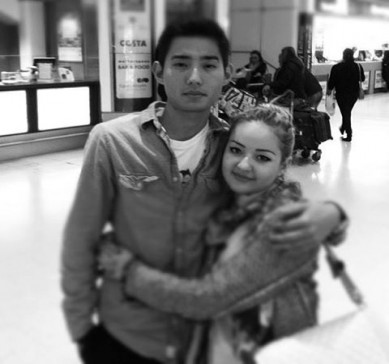 I was born in 1992 Almaty, Kazakhstan just after the fall of the Soviet Union. Both, my mother and father came from modest families and in order to support our family, they did everything from sweeping the neighbourhood yards to selling fruit on the market. With a lot of dedication and hard work, my father managed to set up a successful holding company, Astana Holding in 1992, which kick-started his business career. We are an exceptionally close-knit family and the repressive events of the past decade have strengthened our bond even more.

Madina and I left Kazakhstan in 2002. This was when our father was imprisoned a year after he co-founded the Democratic Choice of Kazakhstan, which is an opposition party to the current thief run, authoritarian regime. Clearly, he was imprisoned for his part in the opposition. During his time in prison, he faced torture and mistreatment. Many human rights organisations, including Amnesty International, supported my father during his struggles and continue to do so to this day. It was too dangerous for Madina and I to remain in Kazakhstan, so we fled to the UK to seek safety. Our family’s safety was really under threat and an example of that would be an attempt to kidnap me earlier that year. I believe it was a tactic used by the regime to silence my father and his vision for a free Kazakhstan. After serving a year in prison, my father was pardoned under the conditions that he leave politics behind. However, my father continued to support the opposition and he never gave up his vision for a Democratic Kazakhstan.

We have experienced threats, kidnapping and assassination attempts and suffered many other injustices.

Therefore, the constant threat and harassment of our family never ceased. We were constantly watched, followed and harassed. Not so long ago, most of our family members found tracking devices under our cars. In the past, I would see a company of men and a number of cars follow me across the UK, as I used to travel constantly to my University in Leeds (3 hour drive from London). It's a very disconcerting feeling knowing that your every move is being watched, photographed and your every phone call is being recorded. It I’s even more disconcerting knowing that the people you love are always in danger, especially our younger siblings like my little brother and my little princess sister.

Throughout the past decade we, as a family have faced threats, kidnap attempts, assassination attempts and a whole lot of injustice. The threats came in many different forms but most that I remember, were letters addressed to our home in London. We would always be careful not to open unknown letters with bare hands for fear of these letters being coated in poison. I remember the uneasy feeling I had every time I would see an ambulance or a police car speeding with its sirens on in the area, as I made my way back from school. Each time, I worried for my family. Of course, these worries were not unfounded. There was an attempt to assassinate our father not so far from our home. Thankfully, he was traveling in a bulletproof car that day and got away unscathed. However, the events of the past decade took a turn for the worst the summer of 2013.

In May 2013, a company of armed men kidnapped our mother and six-year-old sister in the middle of the night in Rome. For the first 24 hours, we were not even aware that it was the Italian Special Forces, as they were dressed in civilian clothes and never let anyone know where my mother and little sister were being taken. You can imagine the amount of stress and grief my family and I had to experience during this time. What followed after was an incredibly illegal deportation and kidnapping of my mother and sister from Italy to Kazakhstan. The illegal deportation took place within a record breaking 72 hours, where my mother and little sister were expelled on a private jet. This is in contrast to a normal procedure that usually takes at least a month.

The Italian government has already admitted the illegality of the operation and renounced the deportation. However, Kazakhstan has shown it’s intention to keep my mother and six year old sister, where my mother is being charged with drawn up criminal charges. Italy has shown its helplessness at returning my mother and little sister. In Kazakhstan, they face a real danger to their life and everyday we are worried for them. I really hope that the international community wake up soon and side with us in our fight against these injustices, clear criminal activity and a repression of a nation.